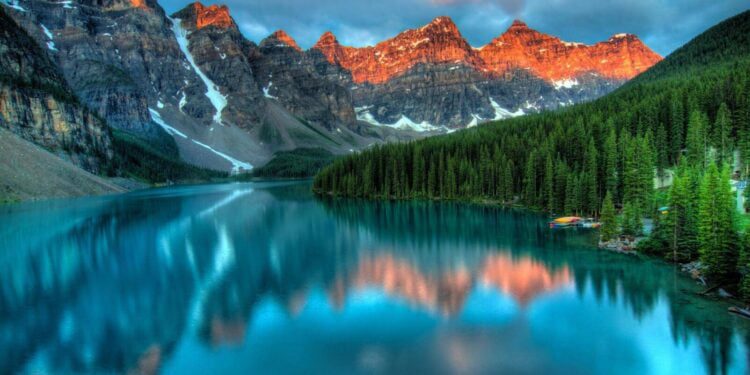 Canada is blessed with its natural treasures galore. The stunning scenic beauty and pristine wilderness have bewitched travellers times and again. Behold the world’s best backyard, thanks to the picturesque national parks.

Alberta, a Western Canadian province, homes five of them, being some of the best at it! These five Alberta National Parks preserve over some 63000 square kilometres of area, which can fit the country of Croatia.

Four out of five are Unesco World Heritage Sites that tend to enjoy the spotlight throughout the year.

1. An Intro to Alberta National Parks

Alberta’s national parks are amongst the oldest in Canada, and some are amongst the smallest. They enclose an enormous area of natural wealth, wildlife, and striking landscapes, including towering peaks, mammoth glaciers, pristine lakes, frothy cascades, karst sinkholes, salt plains, vast swaths of boreal forest, the world’s two largest dark sky preserves (ideal for seeing Northern Lights), and the world’s largest herd of wood bison.

If you are yet to visit some of these best-hidden gems and their sheer beauty, it’s time to plan your next summer trip!

Without further ado, check out these five Alberta National Parks to add to your Canada bucket list!

The oldest national park in Canada, Banff National Park, was founded in 1885 in the Canadian Rockies. Offering an exquisite Canadian wilderness experience, Banff covers an area of 6641 sq. km and is a natural treasure trove for those seeking.

The pristine snow-capped peaks and turquoise glacial lakes are just the icings on top!

Banff National Park has three dominant ecoregions – montane, alpine, and subalpine. Mount Temple is breathtaking from the heart of the Rockies, with a 360° view of the Lake Louise Valley and a popular mountain.

Added to the hot springs and the best skiing in the world, Banff welcomes nearly 3 million visitors yearly. With plenty of to-do lists, explore the hiking trails by bike, on foot, or on horseback.

To top that, you are guaranteed to spot some residents, i.e., Grizzly bears, moose, elks, wolves, foxes, and a variety of bird species.

With the fairly easy hike on a flat trail, convenient Alberta transportation, and other attractions nature offers, Banff has made it to one of the top Alberta national parks for couples seeking national parks.

Located 342 km north of Calgary, 35 minutes east of Edmonton, Elk Island National Park is the eighth-smallest of Canada’s national parks at 75 square miles and the only Alberta National Park that is not a UNESCO World Heritage site.

Despite this, Elk Island National Park plays a vital role in the international effort to preserve bison. It hosts North America’s biggest and smallest terrestrial mammals, the wood bison and the pygmy shrew, respectively.

Over 300 wood bison, a once almost extinct species, live on one side of the highway dividing Elk Island, and 400+ plains bison live on the other.

This park is located within the Beaver Hills Dark Sky Preserve, posing as a prime hotspot for stargazing and checking out the northern lights. It is a great place if you are looking for a quick escape from the concrete life and to taste the best of nature.

Home to the second-largest dark sky reserve in the world and the fifth-highest peak in the Canadian Rockies (Mount Edith Cavell), Jasper National park is rugged and wild. It covers a massive area of 11000 square kilometres precisely.

There are over 1700 lakes in Jasper, and while only 100 have actual names, the biggest attraction is the Athabasca Glacier, the most-visited glacier in North America.

Whether the sunny summer or snowy winter, this is where Canadian wilderness is at its finest! Well known for its stunning geographical attributes, i.e., snow-capped peaks, giant waterfalls, crystal blue lakes, and hot springs.

Crowded mostly in the summer months, there are hiking trails, campsites, rivers, and lakes to visit for groups seeking national parks. In the winter, explore the park on snowshoes, cross-country skis, ice skates, or even ice cleats for a one-of-a-kind tour of a frozen canyon.

With its rustic charm, snowy landscapes, and some of the finest Alberta sights, Jasper is arguably one of the best places to spend Christmas in the world.

While exploring the wilderness, here are six tips to remember when photographing in national parks.

Tucked right in the southwest corner of Alberta, 258 km from Calgary, Waterton Lakes National Park borders Glacier National Park in the United States and is considered a World Heritage Site.

Mount Blakiston is the highest point in this park at 2910 meters tall. Known for its lakes, as the name suggests, Waterton houses Upper and Lower Waterton lakes, Cameron Lake, Bertha Lake, Lonesome Lake, and Summit Lake.

A far lesser-known Alberta National Park than Banff and Jasper, Waterton makes up for it with colourful wildflowers, red rock canyons, and spectacular wildlife.

This park is a hiker’s paradise to avoid the crowd of other parks in Alberta, with over 200 kilometres of trails to choose from. There are other ways to enjoy yourself on a canoe, kayak, paddleboard, or swim if you feel brave!

Waterton Lakes National Park is a great shout as being one of the budget-friendly Alberta National Parks if you are to avoid the usual tourist crowd. See the four sets of red Adirondack chairs placed at various points in the park if you are a bit of a treasure hunter!

Spanning an area of around 44,807 square kilometres, the Wood Buffalo National Park is the largest national park in Canada and the second biggest in the world. As the largest, remotest, least visited of Alberta National Parks, this park encompasses Alberta and northwest territories.

Bigger than the country Switzerland, Wood Buffalo was established back in 1922 to conserve a nearly threatened species, the wood bison, which currently houses the world’s largest herd of free-roaming bison.

The Wood Buffalo National Park is also a nesting site of another endangered species, the whooping crane, North America’s tallest bird. Besides bison, the park is also home to a massive array of wildlife and the largest dark sky reserve in the world!

Besides wildlife, you can also go hiking and mountain biking or explore the Peace-Athabasca Delta, which sees millions of birds pass through each year.

The least convenient of the Alberta tours, you’ll have to fly or drive 15 hours from Edmonton to reach Fort Smith, the main access point to the park, which is what contributes to this lesser-known national park.

But if you make it, it’s worth visiting one of the best national parks Canada has to offer.

Check out The Best of Canada’s National Parks!

Q.1 How Many Alberta National Parks Are There?

Q.2 Which Is the Most Famous National Park in Alberta?

Ans. No list of famous Alberta National Parks would make it without Banff National Park! Banff is Canada’s oldest and most visited park, with over 6,000 square kilometres of untouched wilderness.

Q.3 What Are Some Other Things to Do in Alberta?

Q.4 Which Is Better, Banff or Jasper National Park?

Ans. Banff has a better location for ease and access to the mountains. Jasper is much more of a haul to get to, and if coming from Calgary, you’ll have to pass through Banff and drive the Icefields Parkway to reach Jasper.

Q.5 When Can You See the Northern Lights in Banff National Park?

Ans. The northern lights in Banff are usually best from October to mid-April when the night sky is darkest, but they shine their brightest during the winter months of December to February. The best chance to see them is on clear nights with a new moon.

Alberta hosts some of the largest, most beautiful, and most famous national parks. The five Alberta National Parks offer a plethora of unmatched landscapes, wildlife, and unrivalled experiences.

With so much to see and experience in the wilderness that most Albertans are yet to achieve, take your best pick and be prepared to give in to a lifelong addiction!

So green panthers, are you ready to sign up for a lifetime adventure?

The recession is hitting North America – What and how will most…