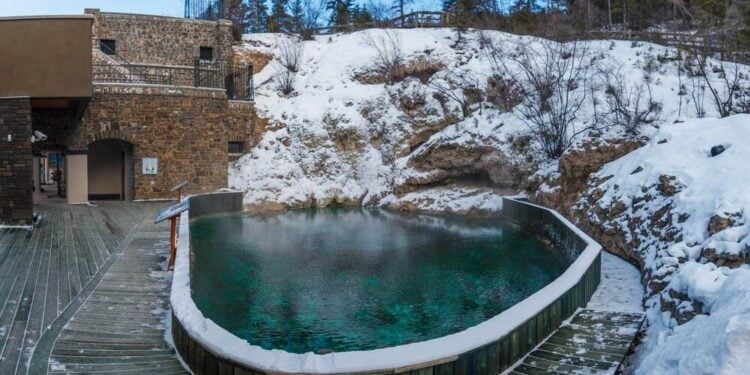 Who doesn’t love visiting new places and learning about other people? Travelling is a great way to explore unknown areas, experience different cultures, and take a break from your daily routine.

If you’re planning to visit Banff, in Alberta, Canada, you should definitely check out the Cave and Basin National Historic Site.

The Cave and Basin National Historic Site is a popular tourist destination, with many visitors coming to the park to see the hot springs, go hiking, and learn about the history of the area. There is a visitor center on-site, which offers a variety of educational programs and activities for visitors.

1. Facts About the Cave and Basin National Historic Site

This site includes the historic Cave, the Basin, the interior pool, and the trail leading to the original steam vent. It also includes the ruins of the original hotel, the bathing pavilion, and the caretaker’s cottage from the 1900s.

We’ll take a look into the origins of Cave and Basin National Historic Site and then about what you can expect from this national historic site.

In 1883, three railway workers came across thermal springs in Banff. This discovery led to the creation of what we now know as the Cave and Basin National Historic Site.

These three were Canadian Pacific railway workers, William and Tom McCardell, and Frank McCabe. They recognized the potential of the area, and so they set up the first boundary around it.

However, it should be clarified that these three were not actually the first people to have found it, as there is evidence of prior human habitation in the area.

The railway workers found a cave on the Sulphur Mountain in Banff, which was in the Bow Valley in Banff, and realized that it contained hot springs.

They noticed steam rising from the ground, and upon further investigation, they found a steam vent leading into what we now know as the Cave and Basin.

The three railway workers tried to claim the land, arguing that it should belong to them as they had found it. However, several other parties tried to lay their own claims on the land, leading to a legal dispute between the parties.

The Government realized that these hot springs would be useful in tourism and revenue generation, and decided to take over the area.

1.1.4 The First National Park In Canada

In 1885, the Government turned the land into a Hot Spring Reserve, covering over 20 square kilometres. Settlement and sale were prohibited.

In 1887, the Reserve was expanded to over 650 square kilometres and was named the Rocky Mountains National Park, which was the first national park in Canada.

This action was done under the new Rocky Mountain Park Act, which established that natural resources should belong to the people, and not to private individuals.

Later, the entire area was finally given the name Banff National Park.

There are many things to do at the Cave and Basin National Historic Site. There are hiking trails near the area, where you can enjoy scenic views. There are breathtaking scenic points, and great places to plan a picnic as well. Interactive theatre exhibits and tours are also available.

The Cave and Basin Hot Spring itself can be reached through a short tunnel. It is a small but beautiful thermal spring located inside a cave. While you cannot take a dip in these waters, and the smell of sulphur (a rotten egg smell) may be overpowering, the history surrounding this basin will surely enthrall you.

Among the nine hot springs on Sulphur Mountain, the Cave and Basin is the only one with a cave large enough to accommodate groups of people. Be careful though, this might result in overcrowding in the cave.

There are several scenic trails in the area:

The Discovery and Marsh Trails are also known as the Cave and Basin Trail.

The endangered Banff Springs Snails are the most important species at the Cave and Basin National Historic Site. These 3-5 mm size snails can be found in the waters of the Cave and Basin, floating on the water where the hot spring bubbles. Other endangered wildlife species are also present in the area, including the Banff Longnose Dace Minnow.

At the fish blind on the Sundance Trail, you’ll have the opportunity to marvel at all the waterfowl hanging around. At the fish viewing platform, if you look closely, you’ll see lots of bright fish.

Beyond the Marsh Loop, there is an area of the forest restricted from visitors. This is for the benefit of larger wild animals, such as wolves and bears, to move across the land. Who knows, maybe you’ll catch a glimpse? But follow all the protocols and don’t stray from the path.

1.3 Some Venturesome Things to Do Nearby!

There are great picnic spots along the routes, and a plethora of wildlife for you to enjoy, including waterfowl (including ducks), fish, the endangered Banff snail, and 6 varieties of orchids.

Sundance Creek, along with its waterfall and rapids, is a great scenic point on the Sundance Canyon Trail.

It contains a short walk to the Cave from the inside, which is separate from the Discovery Boardwalk above, that takes you to the steam vent. It also has a Story Hall, with large screens and display boards, telling you about thermal springs, the endangered Banff Snail, and the history of the area.

While the Cave and Basin Hot Springs are the main attraction here, there are several other springs in the larger Banff National Park area, such as the Banff Upper Hot Springs.

There are several tours available for visitors to take advantage of, and most are free with an admission fee. Parks Canada offers these tours. The first 4 are free, but the next two require advance purchasing.

You can check the details, timings, and availability of these tours and other activities here.

1.3.5 Other Activities and Exhibits

Other fun activities and exhibits offered here include:

2.1 What Exactly Is the Cave and Basin National Historic Site?

Cave and Basin National Historic Site is a national park and the birthplace of Canada’s national parks system. It is open year-round, although some facilities and activities may be closed during the winter months due to the cold weather.

The park is located in the town of Banff, which is in the Rocky Mountains of Alberta and is easily accessible by car or by bus.

2.2 Can You Swim at The Cave and Basin National Historic Site?

You cannot take a dip or swim in the Cave and Basin Hot Spring at the Cave and Basin National Historic Site. This prohibition is to protect the endangered Banff Snail that is found in those waters, as they are a very fragile species.

2.3 how Long Does It Take to See the Cave and Basin National Historic Site?

2.4 Is the Cave and Basin National Historic Site Free to Visit?

Admission for entry to the Cave and Basin National Historic Site is free for people aged 17 years or younger, and for those who have obtained a valid Annual Discovery Park Pass.

Some of the tours are free with a daily admission fee. If you would also like to visit the Banff Upper Hot Springs, you will be required to purchase a Thermal Springs Pass. You can take a look at the details here.

2.5 What Are the Different Ways to Enjoy the Cave and Basin National Historic Site?

There are many ways to enjoy the sites at the Cave and Basin National Historic Site and the Banff National Park. You can opt for walking or biking tours, or you can opt for longer bus tours as well.

You can also have the exciting option of multi-day and extended tours, taking you through the historic Banff sights.

Before the Cave and Basin National Historic Site was discovered by the railway workers, records dating back to the 1850s show that the Indigenous Peoples had known of this land for over ten thousand years.

The Cave and Basin National Historic Site has been described as a pretty but amazing experience by those visiting Banff. (You can check out the best times to visit Banff and the other attractions it offers here!)