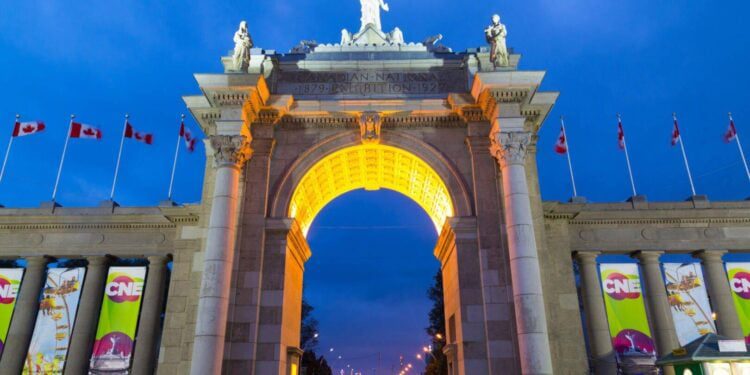 All the Canadian folks, as well as everyone who loves the fairs, must be super thrilled this year as they got to experience the Canadian National Exhibition that is ‘The Ex‘ after two whole years.

1. What Is The Canadian National Exhibition

The Annual CNE is held at the Exhibition Place constituting 192 acres of land, situated west side of downtown Toronto along the shores of Lake Ontario, in Toronto, generally in summer.

It has a huge exhibition place for different shopping exhibits, live music, entertainment, midway rides for children, and tones of unique food.

It is an 18-day summer event from the third Friday of August to The Labour day weekend in September, where visitors are given entry through tickets. It is Canada’s biggest annual fair which has something for everyone.

Competitions, concerts, as well as live music are some of the major attractions at the Canadian National Exhibition.

The Canadian National Exhibition manages to attract tourists from around the world throughout the year, but especially for 3 weeks for the games and their competitions and the majestic food building directly impacting the economies of Ontario as well as Canada.

The Better living center is a building that takes care of almost everything, from event winners to paramedics.

Back in 1879, the members of the Toronto city council were elated as the Toronto Industrial Exhibition was organized as a result of their efforts to start a fair permanently in Toronto. It started as a countryside fair to promote agriculture and industry.

Subsequently, it was renamed as Canadian National Exhibition, and rides were set up for bringing in more patrons from and around the nation.

After that, the fair returned with an enhanced zeal and a modern aesthetic, bringing in the latest industrial products and technological advancements along with agricultural goods but it became much more than that.

In present times, Canadian National Exhibition, along with its technical and agricultural side, has become a national community affair. It has evolved into a platform for artists to showcase their talents, be it music, sports, or even art and crafts.

As one of the largest fairs in North America, CNE, has many things that anyone, especially the locals, looks forward to, like the grand air show showcasing Canada’s cultural heritage.

It has also successfully set up many exhibitions and competitions to increase the spirit of the exhibition place, along with various live music concerts and a Labour day parade.

4. Attractions at The Canadian National Exhibition

To comprehensively count the attractions at the Canadian National Exhibition would be a tough task as everything you see around is an attraction. Exploring them all will be even more fun.

One of the main attractions of the Canadian National Exhibition, the Gaming garage would be everything you could dream of as a person who plays games professionally or just for entertainment.

E-sports competitions are organized for professional participants in games like Fortnite. Canada also witnessed its first robotics competition at Cne.

The drone show is one of its kind at The Canadian National Exhibition where cutting-edge theoretical drone technology is used to create an amazing experience through immersive cinematic experience for the people of Toronto.

Organizers of the Ex know the importance of our furry friends, thus organizing heartful events to increase the empathy of the audience towards animals through entertainment like:

4.4. Arts and Sculptures at CNE

Being one of the top agricultural fairs in Canada, emphasis on nature is laid, and the garden show is an example of the same at CNE.

‘The giant plastic tap’ raised awareness about plastic pollution whereas the sand sculpture and butter sculptures became the talk of Toronto.

The three-day air show was held this year, featuring various aerial acrobatics demonstrations and formations through the best of the fighter jets of the Canadian Air Force.

This event is generally held on Labour day weekend and can be seen from some areas of the Canadian National Exhibition Place and people of service to the Canadian Air force are its participants.

CNE, following its tradition, hosted its famous Labour Day Parade taking place in September to celebrate the strength and solidarity of soldiers. The ex also hosted its 100th Wariors’ Day Parade which is the longest-running Veterans’ parade in the free world.

4.6. The Midway Rides and Carnival at CNE

The grounds at CNE are jam-packed with all kinds of exciting rides like roller coasters and Ferris wheels and dragons and all the other rides you could think of, keeping in mind the various interests of its patrons.

Visitors from all around Toronto, and some from around Canada come here for the midway rides and the fun with it.

4.7. Shopping and Cassino at CNE

Visitors warm the exhibition place for exhibits and shopping. The visitors love to shop for various things like Arts, crafts, hobbies, home, and gardening, through different outlets like outdoor marketplace and warehouse outlets.

The casino is also regarded as an important event for The Canadian National Exhibition, as the people of Toronto seem to love it a lot.

People throughout the CNE, that is from august till September come here according to different interests, but min among them being the food.

The food building encompasses all the varieties you can think of starting from Indian shawarma to Baskin-Robins, bacon, steak, juices, burgers and so much more.

Whereas the Food trucks, located inside the historic Princes’ gates serve amazing street food, some of which you can’t even imagine.

CNE is talked about in the whole city and world for its fusion foods. a 2 ft. long taco, deep fried coffee, ketchup and mustard ice creams, mac and cheese lemonade, and flaming hot Cheetos burrito were highlights of food at CNE.

Along with all these, CNE also has numerous other things like the auditions of The Rising Star and live music concerts by famous artists which can be best experienced by witnessing.

Don’t miss out to visit CNE, if you get an opportunity. At last, it would be safe to say that the Canadian National Exhibition is justifiably entitled to Canada’s wonderland.