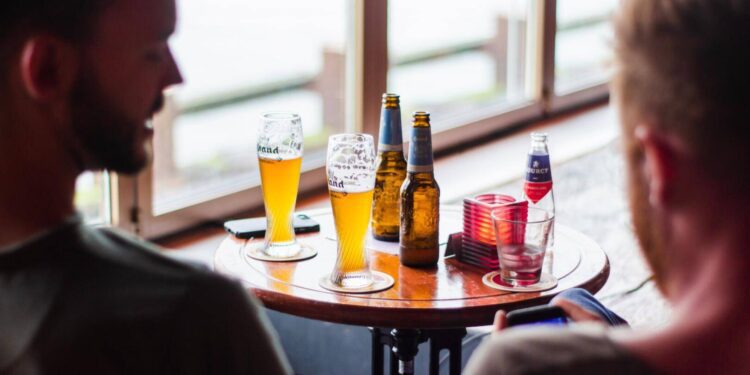 In Chilliwack, there are many outstanding breweries that offer a variety of beers and experiences.

The Fraser Valley is the province of British Columbia, which is the largest agricultural area, making it the ideal location for real farm-fresh experiences.

Visit a nearby farmer’s market, trek along beautiful trails, get lost in apple and berry orchards, or fill your stomach with a farm-to-plate feast.

Along the way, sample a variety of tasty, regionally brewed craft beers from the Chilliwack Brewery.

Whether you’re farming crops, fishing in a river, or hiking one of the enormous mountains with your family or friends, these beers are the perfect travel companion.

For more than a century, the Fraser Valley has been home to the heritage of growing hops, a vital component of beer that adds bitterness, flavour, and aroma.

At Farmhouse Brewing Co, the barley and hops are grown and harvested themselves, you can definitely taste the terroir of the beer.

The well-known setting of Old Yale Brewing is tucked away in the lush and productive farmland of the Chilliwack River valley.

In addition to this, Bricklayer Brewing and Field House CHWK, a branch of downtown Flashback Brewing, offers an urban atmosphere.

The award-winning Ravens Brewing and the original Field House Brewing, which both honour the local agricultural riches through their beers and their well-liked Canteen Kitchen, are located in Abbotsford, the main city in the Valley.

Exploring the Fraser Valley is mainly about following your thirst and curiosity to learn new things. The Chilliwack breweries list below includes those breweries you should not miss while in town.

Due to the amount and type of land required, there are only a few farm-based breweries, that grow their own barley and make fresh beer.

This is being carried out by The Farmhouse Brewing Co. on its 11.5-acre Greendale farm.

A couple who previously owned a smaller hobby farm started this brewery.

This Chilliwack brewery is in a custom-built building that has a tasting room, a heated patio, and a picnic area outside.

Their beers have seasonal touches mixed in with standard core beers. This brewery opens from Monday to Saturday and they are currently not taking any reservations.

Along with other appetizers and snacks, the kitchen of this Chilliwack brewery serves fresh artisan-style pizza and pretzels baked in a Goliath Forno Bravo oven. You can have chocolate graham crackers or marshmallow beer for dessert.

Hidden in the Chilliwack River valley’s lush and productive farmland, the brewing facility of this Chilliwack brewery was recently expanded to 11,000 square feet (10.22 a), doubling the capacity of the tasting room to 100 people.

They know the craft of making great beer and wine. Old Yale’s Four Seasons lineup has a good selection of core styles, like the award-winning Sasquatch Stout.

For a bite to eat and a beer or a glass of wine, stop by this Chilliwack brewery. You can get growler fills or cans to take home.

The brewery almost always has something going on. On Thursday nights, Old Yale hosts a Back Porch Music Series with local artists and other events throughout the week.

This Chilliwack brewery is perfect if you’re looking forward to a good time with your friends and family.

Old Yale Brewing has a licensed patio and an on-site food truck called the Campfire Kitchen.

This wood-fired kitchen has a full menu of fresh food that goes well with the beer, cider, or wine selection. This Chilliwack brewery also serves some gluten-free options.

Located in downtown Chilliwack is the beautiful brick building in which Bricklayer Brewing is present, as reflected in the name.

Kristopher Schmidt started homebrewing shortly after moving to Chilliwack from North Vancouver a few years ago and quickly developed a passion for making great beer. H

e is excited to switch from boiling five gallons of water on a turkey burner to brewing on the brewery’s large system.

Kris’s wife, Megan, is in charge of the front desk.

Comfortable bar stools, booths, and numerous brick accents give Bricklayer’s tasting room a retro-modern vibe. Additionally, there is a patio with ample room for relaxation.

This Chilliwack brewery is best for catching up with friends and having a good time with family.

Despite the absence of a kitchen in this Chilliwack brewery, Bricklayer serves charcuterie, olives, and other snacks in addition to focaccia-style pizza and soft pretzels from a nearby baker.

Hope is a meeting place in Chilliwack, BC. It marks the eastern boundary of the Fraser Valley and is located at the point where the Fraser and Coquihalla Rivers meet.

A lot of people drive through this place and often stop there to rest, stretch their legs, and maybe eat something. As a result, the fact that Hope did not have a brewery of its own was always a bit of a surprise.

When Mountainview Brewing finally opened, everything changed. Adam and Danielle Keil are this business’s owners.

With so many tourists driving through Hope and an untapped local market, they saw the potential for a brewery. They use fresh mountain water to brew their beer.

The large, open tasting room at Mountainview overlooks the brewery.

This Chilliwack brewery has a food truck that serves sandwiches, salads, and other snacks, including gluten-friendly options, in its kitchen to go with the delicious selection of beers.

The Dark Side of Town, Sweethearts IPA, First Blood Orange.

This Chilliwack brewery was started by a local businessman who had a passion for the community and, of course, craft beer.

It is in the historic downtown of Chilliwack, BC, in a beautiful mid-century brick building, showcasing old-school values.

The original fir ceiling and beams were discovered during renovations for the brewery, and the wood was repurposed to construct the tasting room’s tables and counters.

A local Heritage Business Award was awarded to Flashback Brewing Co. for the best commercial use of a historic place.

This Chilliwack brewery has some very different beers to try out. Produce from local farms as well as coffee beans from a local roaster are frequently used in the beers.

This Chilliwack brewery offers a wide variety of foods, including a few gluten-friendly options.

This article only includes Five Breweries in Chilliwack, but there are many other breweries that are definitely worth your attention. Abbotsford and Maple Ridge are also home to many good breweries.

Ravens Brewing in Abbotsford, Maple Meadows Brewing, and Ridge Brewing Company in Maple Ridge are some of the best breweries in this location.

You can visit these breweries’ Facebook pages or websites to get more information or to contact them. The province of British Columbia, in Canada, is home to such mind-blowing breweries. You definitely don’t want to miss them.