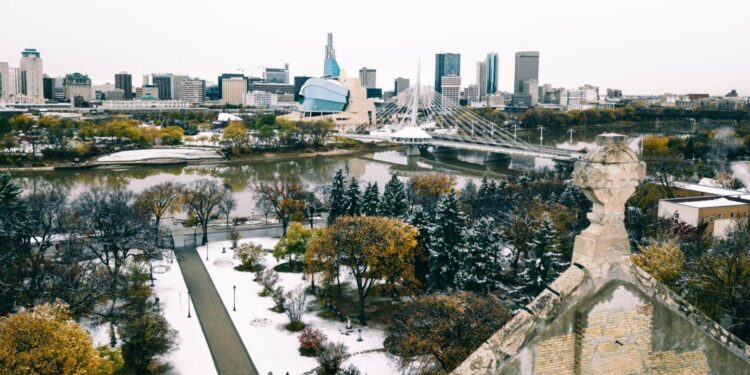 Manitoba is a Canadian province, it is Canada’s fifth most populous province, with a population of 1,342,153 as of 2021, known for its diverse landscape, including lakes, forests, and prairies.

It is also home to several cities that have a rich history and cultural significance.

To be designated as a city in Manitoba, an urban municipality must meet the requirement of a 7,500 population. Based on this requirement, the province contains 10 cities.

Here are Five Famous Cities in Manitoba that are worth exploring:

Winnipeg is the capital and largest city of Manitoba. It is the 7th most populous city in Canada.

Winnipeg is a cultural, governmental, educational, and industrial centre for Southern Manitoba and Northern Minnesota. It is located near the longitudinal centre of North America and in the central part of the province, along the banks of the Red River.

The city is known for its diverse population, which includes a large Indigenous community.

Winnipeg was founded by the Selkirk settlers on July 23, 1812, and it became a city in 1873. The city has a land area of 705.42 square kilometres and a population density of 1,071 people per square kilometre.

Winnipeg has a rich cultural scene, with several museums, galleries, and festivals throughout the year. Some of the popular attractions include the Manitoba Museum, which offers a glimpse into the province’s history, and the Winnipeg Art Gallery, which showcases contemporary and traditional art from around the world.

It is also home to the Winnipeg Jets, a professional hockey team that plays at the bell Mts Place Arena. The Forks, a popular gathering spot, offers a variety of dining and shopping options, as well as outdoor activities like skating and biking.

Brandon is a city located in Western Manitoba, near the border with Saskatchewan.

It is known as the “Wheat City” due to its rich agricultural history.

The city has a strong arts and culture scene, with several galleries, theatres, and music festivals throughout the year.

It was first incorporated as a town on November 10, 1881. Brandon has become a major service centre for southern Manitoba with many large retail stores and its proximity to the US border.

One of the popular attractions in Brandon is the Commonwealth Air Training Plan Museum, which commemorates the efforts of Canadian, British, and other Allied air forces during World War II.

It is also home to Brandon University, which offers a range of undergraduate and graduate programs.

Thompson is a city located in northern Manitoba, about 730 kilometres northwest of Winnipeg. It is undoubtedly one of the major cities in Manitoba.

It is known for its mining industry and the nearby Hudson Bay Lowlands, which offer a unique landscape for outdoor enthusiasts.

Thompson has been nicknamed “The Gateway to Hudson Bay” because of its location near both James Bay and Hudson Bay (the latter being one of the world’s largest bodies of water).

The city has a rich Indigenous history, with several First Nations communities located in the surrounding area. The Heritage North Museum is a popular attraction that showcases the region’s history and cultural heritage.

Thompson is also home to the Burntwood Ski Area, which offers downhill skiing and snowboarding in the winter months.

The city is also a gateway to the nearby Nisbet Provincial Forest, which offers a large number of outdoor activities, including hiking, fishing, and hunting.

Portage la Prairie is a city located in central Manitoba, about 80 kilometres west of Winnipeg and has established itself as an agriculture-based economy.

It is known for its rich agricultural history, with several farms and ranches located in the surrounding area.

This small town is located in Southern Manitoba and was founded in 1811. It was originally named Portage la Prairie but was later renamed after the township in which it was situated.

The city’s motto is “The Heart of Manitoba” which speaks to how important this small town has been throughout its history and what it means to Manitobans today.

The town also has an annual fair that attracts visitors from all over the province every year, as well as many other events throughout the year that people can attend.

The city is home to the Canadian Fossil Discovery Centre, which showcases the region’s rich fossil history. The Portage and District Arts Centre is a popular attraction that showcases local and regional art, as well as hosts events and workshops throughout the year.

The city also has several parks and outdoor spaces, including Island Park, which offers a range of recreational activities, such as fishing, birdwatching, and picnicking.

The population of Portage la Prairie is 13,270 in the census.

Steinbach is a city located in south-eastern Manitoba, about 50 kilometres southeast of Winnipeg.

It is known for its strong Mennonite community, which has a rich cultural and religious history. It is Manitoba’s fastest-growing city.

The city is home to several Mennonite heritage sites, including the Mennonite Heritage Village, which offers a glimpse into the traditional lifestyle of the community.

The Steinbach Cultural Arts Centre is a popular attraction that showcases local and regional art, as well as hosts events and workshops throughout the year.

The city is also home to several parks and outdoor spaces, including the Steinbach Spray Pad, which offers a range of recreational activities in the summer months.

In conclusion, Manitoba is home to a diverse range of cities that offer something for everyone, from the historic charm of Winnipeg to the natural beauty of Churchill.

These five cities in Manitoba are just a small sample of what it has to offer. Whether you’re interested in culture, history, or the great outdoors, it is a destination worth exploring.

Q1. Are There Any Unique or Unusual Attractions in The Cities of Manitoba?

Yes, the cities in Manitoba offer unique and unusual attractions such as the Polar Bear Capital of Churchill and the world’s largest polar bear statue in Churchill.

Q2. What Is the Smallest City in Manitoba?

Flin Flon is the smallest city in Manitoba. The city’s location is unique, as it straddles the provincial border between the Manitoba portion and the Saskatchewan portion.

Q3. What Can I Do in These Cities in Manitoba?

There are a variety of activities and attractions to enjoy in these cities, such as visiting museums and art galleries, exploring nature and wildlife, attending cultural events and festivals, and trying local food and drink.

Q4. Are These Cities in Manitoba Easy to Get To?

Yes, these cities in Manitoba are easily accessible by car, plane, or train. Winnipeg, Brandon, and The Pas all have international airports, and Churchill is accessible by train or plane from Winnipeg.

Q5. Is There a Wide Range of Accommodation Options Available?

Yes, there is a wide range of accommodation options available in these cities, including hotels, motels, bed and breakfasts, and vacation rentals.

The weather in Manitoba can vary depending on the location and time of year. Generally, Manitoba has cold winters and mild summers, with temperatures ranging from -30°C (-22°F) in the winter to 25°C (77°F) in the summer.

It is important to dress appropriately and check the weather forecast before visiting.

So, concluding this, let us know which city you liked the most, and want to make your next travel destination.

So, what are you waiting for? Gear up to hunt the Best Cities in Manitoba!

The recession is hitting North America – What and how will most…